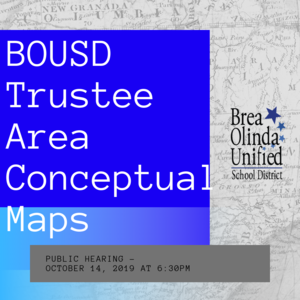 We are seeking your input!

The BOUSD Board of Education is in the process of reviewing four Trustee Area Map options that resulted from a letter the District received in April from attorney Kevin Shenkmen from the law offices of Shenkman & Hughes, PC. The letter challenged the At-Large election process used by the District to elect School Board Members in Brea and forced the District to move to trustee area elections.


Currently, Brea Olinda Unified School District holds At-Large elections, in which each member of the Board is elected by registered voters of the entire school district. Under the new system, Board Members residing in each trustee area will be elected by the registered voters in that particular trustee area. The California Voting Rights Act prefers Trustee Area elections over At-Large elections for school boards and city councils. Similar demand letters have been received throughout the state of California altering the election process.


Using input provided by Brea community members, our demographer produced a set of four conceptual maps that comply with the rules established by the California Voting Rights Act.

The maps are based on the overall population and on the Citizens of Voting Age Population (CVAP).

It is important to note that trustee area elections do not rely on school attendance boundaries as the basis for their creation.


We are seeking input from the Brea community on the four conceptual trustee area maps.


Please use this form to provide your feedback on the four conceptual trustee area maps.


Draft maps can be viewed by clicking on the link below:


Additionally, the public will have the opportunity to provide feedback with regard to the four conceptual maps during a Public Hearing at the Monday, October 14 Board Meeting at 6:30 p.m. in the Brea Civic & Cultural Center Council Chambers.


We truly value your feedback and thank you in advance for your input.